CNN wants to know if Romney can win the general election

And the answer to that one is NO!  That is why the media is pushing him.  Obama will win against Romney and they know it.

If Romney is the Republican choice they will have manged to lose the election that there should be no way for them to lose. . . .

First, Romney is a RINO
Second, Romney is not liked by the Tea Party and will not get out the vote
Third, Romney is Obamacare. . . that is where it came from and it take away one of the biggest things you can go after Obama on.  How can Romney go after him on heal care and be take seriously. . . he can't

Please folks, vote for someone else, Romney can't win
Posted by JD No comments:

Well as you can see here it looks like the candle thing has gotten the stop gun ownership folks attention.

Which facts am I ignoring?  Please let me know so I can fix that:

They tell me as a gun owner I am just a dumb redneck who doesn't get it.  I hold a Bachelors in Psych, and one in Electrical Engineering, I also hold a Master in Engineering Management. ..  Yet they call me stupid for looking at the facts and seeing the truth, I am really missing it because of my lack of education. . ..

And to finish it off they tell me it is better that my own wife or daughter is better off at the mercy of some thug who wants to mug, possible rape, beat and kill her than for her to have the know how and tools to defend herself from the bad guy.

Sorry I don't get it.  How can any rational person give up their right to protect themselves and their family when our founders knew it was so important.

At the time our Constitution was passed most states had said they would not approve it as it stood.  They had to be give the chance to add to it.  Over 180 or so amendments were sent in by the states, and when all the voting was done only the 10 in the Bill of Rights passed.   Our founders in every state required recognition of our basic rights before they would pass the new Constitution.  The most important right they wanted protected was free speech, and the right to self defense from the criminals or the government came in at number two . . . .

Think about that next time someone tells you that you have to give up your rights to be safe. . . .  then walk away, for you are talking to a fool.
Posted by JD 5 comments:

Folks lets get one thing straight folks - Romney is not Conservative OK?

As someone who has been stuck in MASS his whole life and dealt with Romney let me pass on a few things. .  .
1 - He did not raise taxes, he raised fees.  On anything and everything he could.  So expect more big government from him and more cost in fees.
2 - He does not support gun rights.  He raised our licence fees from $25 to $100 and passed an assault weapons ban that suck even after the Feds is long gone.
3 - He can't say a damn thing about Obamacare, he INVENTED IT!  He stuck MA with the prototype and we are going broke paying for it.
4 - He could not beat John McCain last time, you really think he can beat Obama????

Romney is Obama's dream candidate.  He gets no one excited, he can't use Obamacare against him and he is a RINO with no Tea Party support.  He can't win folks, why do you think the media loves him so. . . .

I pray we will have someone else jump in and save us from these fools!
Posted by JD No comments:

A Girl and Her Gun: An Open Letter To The Anti-Gun Folks

A Girl and Her Gun: An Open Letter To The Anti-Gun Folks: In 2005, my husband and I started the process to adopt a little girl from China. It was a brand new scary process that we knew nothing abou...
Posted by JD No comments:

A Candle to Prevent Violence

Following Weerd`s lead, here is my candle to stop violence 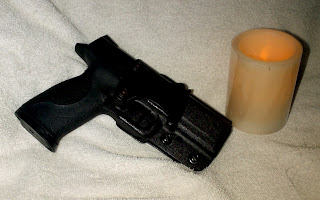 My standard carry piece. . . . and my candle