For giving us freedom to live in this great country. . . .

Image from Cox and Forkum

Posted by JD No comments:

Spent the morning helping a friend run a machine gun shoot for a few folks.  After they were done we had some fun ourselves with the guns. . .

First one I tried was the historic Bren gun 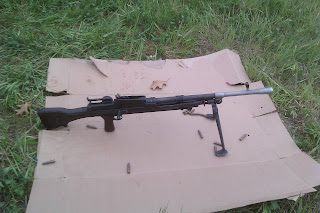 This is the classic British gun from WWII.  I have to say this was probably my favorite.  It is slow but accurate and heavy enough that it has little to no kick.  The odd bit is the mag goes on the top as you see here: 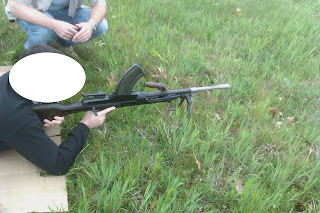 ﻿
So you can't sight down the barrel.  The sites are actually on the left side of the gun. .  .  . Anyway, lots of fun to shoot and with the .303 rounds it packs a punch.
Next up was the classic WWII Sten that the Brits gave their airborn troops. 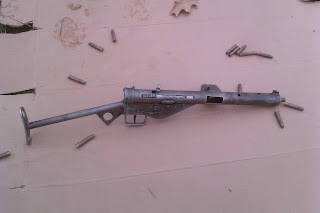 Now this one takes the mag in the side, fires from open bolt, and fires the standard 9mm round.  It doesn't look like much being as they are made out of stamped parts and not finished, but fun to shoot.  It has enough weight to it that it is easy to keep on target and control.  For it's looks it shoots far better than it should.
I finished off my day with the AK-47.  I had to try it as I have a semi version so really wanted to try the full auto. . .. 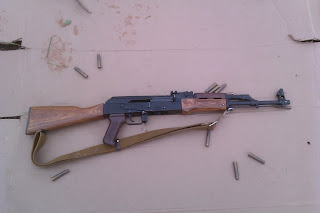 ﻿
Fun to shoot, but it walks a bit, and is not the most accurate thing I have ever shot. . . . To tell the truth, I have no idea how anyone can fire this thing on full auto and actually hit what they are aiming at. . .  or even get close to it. . .  seems like the safest spot was at the point of aim in full auto. . . .
Anyway, had a great day, and then helped with the cleaning of all of them.  Maybe I am just too much of a geek engineer but pulling apart the Bren and Sten to see how they work was almost as much fun as shooting them to me.  I am still amazed when I can get my hands on a piece of history like a Bren and hold it, shoot it, and think about everything that gun may have been through from WWII to now. . .  Really amazing when you think about it.
Looking forward to the next shoot whenever that happens!
Posted by JD No comments:

Email ThisBlogThis!Share to TwitterShare to FacebookShare to Pinterest
Labels: guns/shooting

Finally got down to the range for a bit of trigger time this weekend.
Now I have been working on fixing my pistol skills. . .  I have a bad habit of shooting low and left with a pistol. . . .
How do you fix that?  Well for me it has been dry fire practice.  I have a laser bore site I put in the gun, then aim at a safe backstop and start my trigger practice.  At first it was very depressing as I could see the laser bounce all over as I fired.  But this is good, if you don't know what you are doing wrong, how do you fix it right??
So after a few weeks of dry fire practice when I could I finally got to the range yesterday before the rain.  Got a lot of 1911 practice, and some M&P and I have to say things looked better.  I still have a lot of work to do, but at lease things are moving in the right direction.  I also notice that I push the barrel down when I tried a few shots. . .  more to work on. . .
So, back to the dry fire practice until the next trip.  And the best part?  I can improve my skills without spending a dime on ammo or having to clean the guns again.  = )
Posted by JD No comments:

MA gun laws take another step away from America . . .

Lavallee, Middlesex District Attorney Gerard Leone and Rep. Kevin Murphy helped city officials craft a home rule petition seeking the power to require owners of 10 or more firearms to notify police of the weapons' location within 24 hours of possessing them. The proposed law would also require owners of more than 10 firearms to secure them in a locked safe or vault and install an alarm system with central monitoring that would notify police when the alarm is activated.

Just in case any of you thought MA was even close to still being part of America or a state with any liberty.  I hope this gets tossed but here you never know.

Ya, I am sure all the gangs in Lowell will be the first down to the cops to tell them about all there illegal guns. . . NOT. . . .

GOD I can't wait till I can get out of this nuthouse. . . .
Posted by JD No comments:

So the poor fools in Al Qaeda are now making lots of noise and gnashing of teeth over the end of Osama.

They claim they will now attack the USA and turn our cheers to tears over the blood they will spill.

Ya, right.  If you could do that you would have hit us by now.

No.  I don't see how they could pull off another big attack so what does that leave them with?  The easy stuff.  I think all they can do now is the small stuff, but that still sucks if you get caught in it.  I think they will now go for our schools, our malls, anywhere folks gather that they think they can attack without defenders being around.

There would be a rifle behind every blade of grass."


But the liberal left who hate our way of life have now put us in danger with their unconstitutional limits on our rights.  They have done their best to take away from us one of the greatest safeguards our forefathers put into our Constitution.

Al Qaeda will now try to bring the fight to us. . . we must be ready for them.  Keep your eyes open and carry your gun.  We don't know when or if they can hit us again, but to not be ready for it would be a crime of the worst kind.  We must stand ready to protect ourselves and our families and put an end to Al Qaeda.
Posted by JD No comments:

Al Qaeda has confirmed we got him. . . How nice of them to help out.  Now they will see how they can use this to up recruitment . . . we will see....
Posted by JD No comments:

But no, since it is Obama they said that Unemployment is up, but not as much as was expected so it is good news. . . .

Sometimes I really wonder what world they live in. . .

Posted by JD No comments:

Lets hope they really got him, I hope they publish the proof far and wide so the nuts will see we got him.

After that I hope they wrap him in pig guts and bury him in an unmarked hole someplace and let him rot!

Way to go troops!  Thank you to all who have served and risked and gave all to make this day happen.  This is a great blow to the radicals!
Posted by JD No comments: