Today will be a quiet one around here.  First we go to the town parade to show our respects to the vets that march.  Then it is off to visit the graves of my dad and dad in law. .. .

A quiet day to remember what it is all about.

I hope you and yours have a good Memorial Day.  To all the Vets out there THANK YOU and come home safe.
Posted by JD No comments: 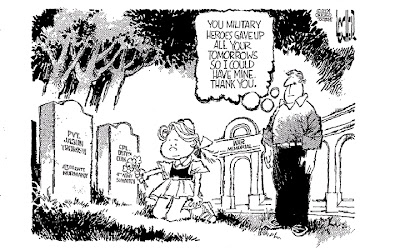 Thank You
Posted by JD No comments:

So how many vacatons have you had in the last three years?

When does this guy work?  Any question as to why we are worse off now than in 2008?  Any questions as to how in touch he is with what the average American is going throught right now. . . . .
Posted by JD No comments:

You can go read it for yourself over here.

Obama has mandated things this Catholic School won't support as is their right.  He says if you have health insurance for anyone you have to cover birth control and abortions anyway. . . .

They say fine, no more insurance. . .

Please tell me if you didn't see this one coming folks. . . .

Obama - taking away health insurance one school/company at a time.
Posted by JD 1 comment:

OK Mr Main Stream Media. . . .  Tell me why I should care what Mitt did 50 years ago yet ignore the news on Obama and his drug use, racist church, hanging with terrorists. . . -

I just don't get how it is important that Mitt cut some kids hair and the guy still can't move on after 50 years but it is irrelevant that  Obama has friends that actively fought against our county and killed cops - basically domestic terrorists.

It's not like you are bias or something right?

Sorry folks this is not news.  This is a desperate attempt to make Mitt look bad by an Obama campaign that can see they are going to lose this election if it is based on Obama's record.